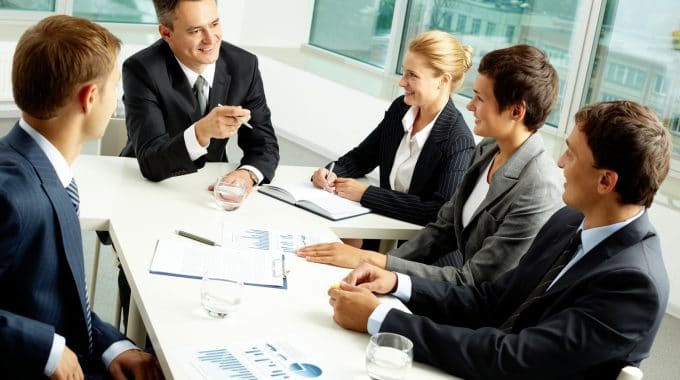 Business meetings, staff meetings and meetings of any sort are, on 95% of occasions, a complete waste of time. This is a recognised fact, although the figure 95% has been plucked from midair to get your attention.

In the last month I have been to a number of business meetings, as well as committee meetings and meetings of organisations. 95% of my time at these meetings has been completely wasted, and the whole thing has been a waste of time.

How can I say that with such certainty?

Well the answer is fairly simple – most meetings do not result in a decision being made. Most meetings involve lots of unnecessary discussion about things that are not relevant to the reason the meeting was called. And most meetings end up being taken over by something or someone that is not really the point of holding the meeting in the first place.

Decisions are Not Made in Meetings

Take a meeting I attended many years ago, when our local youth football team was in discussions as to whether or not merge with a larger neighbouring club. The neighbouring club were offering money and glory if we were to join them. Over 50 people who were involved in the club attended the meeting, and a vote was taken at the end where the overwhelming majority voted to reject the approach by the bigger club and to stay as we were. You would imagine that this was the end of the matter and the club would continue on its merry way. You would be wrong. Within two weeks the club had merged with the larger local team because the management committee had decided that this was in the best interests of everyone in the club at that time. I, along with a considerable number of other people involved in the club, felt considerably frustrated about wasting two hours of our time sat in a meeting discussing something that had already been decided, and that any decision made was going to be completely ignored.

Meetings are to Persuade People

This is a common problem with meetings. Quite often they are arranged to agree to things or try to persuade other people to agree to things that have already been decided on, and the meeting itself is not really for a discussion of an actual issue and for a decision to be made, but rather a chance for whoever has made the decision already to make it look like they have consulted other people before they came to the decision that they have taken.

If you don’t attend a meeting, you cannot be persuaded..

Secondly, meetings emit lots of hot air. Nothing actually is agreed upon. This is usually the case if the people in the meeting do not really have the authority to make the decisions that they are reporting to make, even though they hold themselves out as having the ability to make those decisions. This is often the case when representatives of organisations meet together to discuss something, and the representatives pretend to themselves and to the rest of the meeting that they are in some way empowered to make decisions to come to a conclusion, when in fact the decision will be made elsewhere and then implemented by the people sat in the room at the meeting.

Meetings to Put Face to a Name

The final sort of meeting that is a total and utter waste of time is the meeting to ensure that the people involved in whatever decision or process has been taken, have all met each other face to face. These are quite often the case with new suppliers and client relationships, where the client decides they want to meet the supplier to put a face to a name, when in reality they don’t actually need to meet the supplier at all because everything being done is going to be done remotely. Usually these meetings can be better undertaken via email or telephone, but the old fashioned way of seeing someone face to face prevails, and is something that wastes just about everybody’s time.

I recently went to a meeting for a new client where I met with the owner and the chief executive. After about 20 minutes the owner started working on his laptop during the meeting, and whilst I was talking. He may have thought this was perfectly normal but I had never experienced this before, and it cements my view that the vast majority of the time I would be better served declining any offers to meet, and instead to deal with everything by telephone.

So if you are thinking of holding a meeting with anybody, bear in mind that 95% of your time whilst you are at the meeting will be completely wasted, and you may be better avoiding the meeting completely and instead picking up the telephone and having a chat with someone. The best way of conducting meetings is to try to arrange a meeting so that you do not have to attend yourself, and instead anyone else can attend who wants to make a decision on anything, and then for them to feed back to you afterwards. This means that a meeting takes place, everyone is happy and you do not waste any of your time.